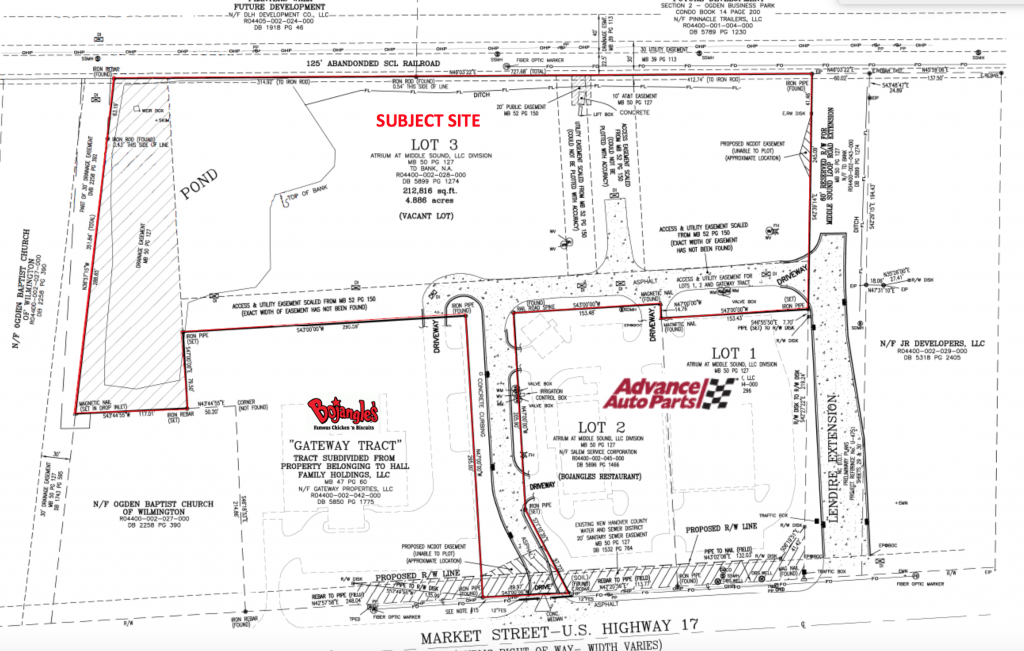 Eastern Carolinas Commercial Real Estate is excited to announce the sale of 7125 Market Street to a Mini Storage Developer. This 4.86 acre tract of B-2 Land located behind Bojangles and Advance Auto Parts off the future Lendire Road connection, will provide a excellent opportunity to those in the immediate area by providing options when it comes to short term storage.

ECCRE predicts a growing movement in Mini Storage as the baby boomers retire, downsize and move south. This sector of commercial real estate on both the development and investment side is set to see continued growth and productivity over the next several years.

Growth in the Ogden submarket of Wilmington has been strong over the last 12-24 months and continued growth and development is expected.

Eastern Carolinas Commercial Real Estate is excited to announce that their client in the acquisition of 10 acres of commercial land spread over three tracts has completed their purchase, moving now to development phase.

Arbor Commons a grocery anchored mixed use development in Midtown Wilmington is now moving into development phase over the next several weeks to bring the site plan to life. The development will consist of a Grocery Store, 10,300 sf retail building and a 45,000 sf medical/office building.

The developer will complete a road extension of Hollingsworth Drive, carrying it through to Peel Street to provide access to the traffic light at the intersection of John D Barry Drive and 17th Street Extension. The property will also have a right in and right out entrance off of 17th Street and access from Peel Street.

Leasing opportunities remain at the Retail and Office Building. For more information on the site click here. Or Click here for the information package. arbor-commons-quick-info-pkg

To Read about this in the Greater Wilmington Business Journal as written by Cece Nunn,  Click Here.

This is strictly Opinion as a practitioner of real estate.

A purchaser wants to purchase a piece of property – Check

A seller wants to sell the property – Check

According to the Greater Wilmington Business Journal Article their attorney has found a loophole in the typical process for rezoning. The residents around Echo Farms are requesting the city down zone a property that could imperil a contract which is a legally binding document. The problem is revealed here.

Excerpt: Henry Winters, treasurer of the Echo Farms Residents Association, said Wednesday, “We really want to work with the city and the planning department on this matter. We’re not against development per se in the city, but we certainly want to protect our golf course.”

The Bold is mine calling out the golf course portion. Well the fact is if you want to protect the golf course, perhaps you should step in to purchase and run the course? In what is becoming a national trend, most golf courses have become money pits and the third owner of the course is not even making money. (A general statement is that the original developer sells to get out, the second owner sells to get out and the third owner makes the money, due to the cheep price on purchasing the course for the third time).

Now I have no idea as to the financial state of Echo Farms but this is completely unheard of in Wilmington but it is a loop hole, and its being exploited, see excerpt.

Kitchin said state law “does not have a blanket prohibition which prevents cities or counties rezoning a property over the property owner’s objection. Whether or not it is good policy is a separate question, but state law generally leaves that decision to each local government’s own zoning rules.

“Unlike the zoning ordinances of many other local governments, which specifically limit the right to ask for a zoning map amendment (also known as a rezoning) to the planning staff or the landowner, Wilmington’s Land Development Code allows any interested party to initiate a zoning map amendment. Although ‘interested party’ doesn’t appear to be defined in the Code, I’d imagine that the neighbors take the position that they have standing to request a rezoning based on their view that they have a direct interest in how this land gets redeveloped.”

Kitchin said the issue tends to arise more frequently in rural counties where local government officials are enacting zoning rules and districts for the first time.

Many Realtors, Property Owners and Developers are taking note of this as it has the potential to become a massive issue in the sale of property in the City and County. What if a developer faces resistance and then there is a counter petition to rezone to a different zoning without the current owners consent?

This issue will effect and affect development. It affects clear title to property as it can be a cloud on title. It will affect sales prices for land if the developer needs to defend a suit or rezoning effort and hire professionals that cost a large amount of money for a uncertain result. This is truly a Pandoras Box Situation for our local real estate economy and hopefully one the city can put to rest, quickly.

For the rest of the article by CeCe Nunn at the Greater Wilmington Business Journal click here.

Garry Silivanch, Partner and Broker In Charge for Eastern Carolinas Commercial Real Estate, was quoted in the Wilmington Business Journal regarding the state of the local market place.

Check out the Story by clicking here.

ECCRE’s team and staff fared well through the storm. Most of our clients properties did as well. To those who are affected through power outage, tree damage or other events, our thoughts and prayers are with you. 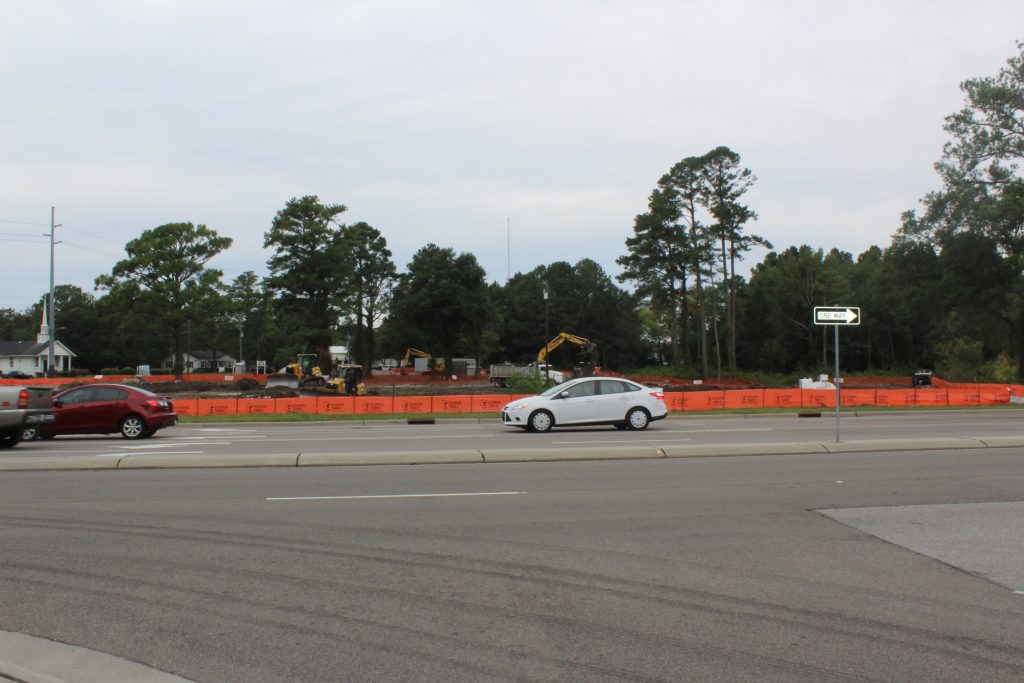 ECCRE is excited that Development is now underway at Carolina Crossing. The Development of Circle K is under way at this hard corner. Check out the pictures! Also check out the development opportunity by clicking here. We have 2.2 acres left for development, BTS, Ground Lease or sale. Stormwater has capacity for impervious surface left. 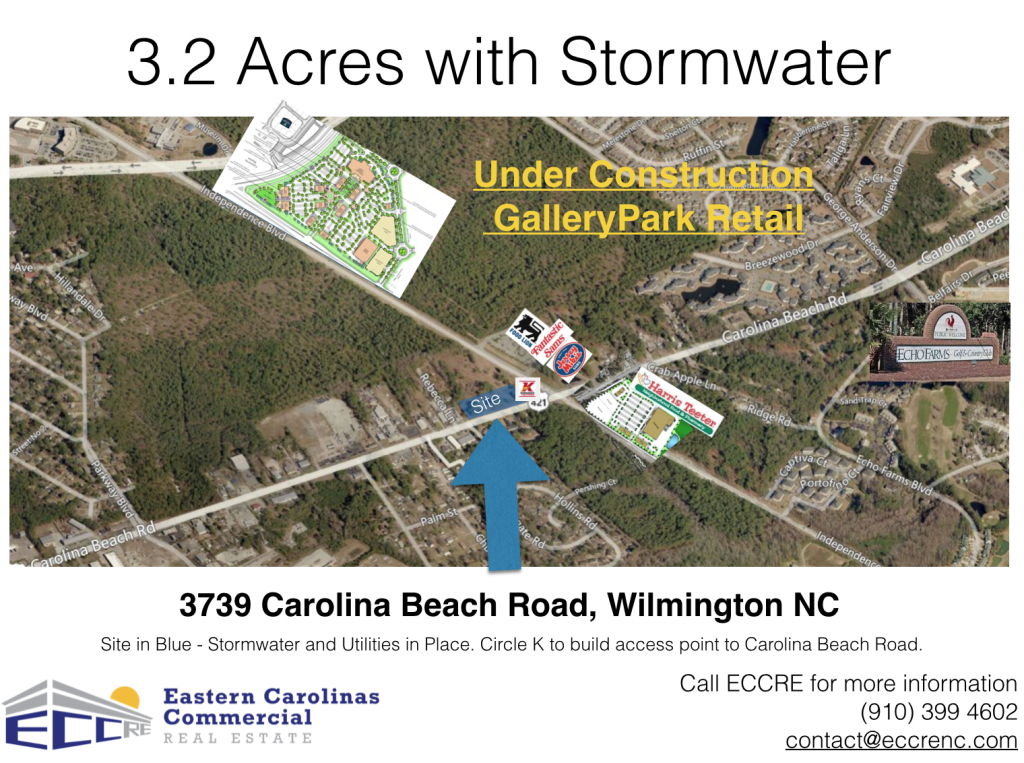